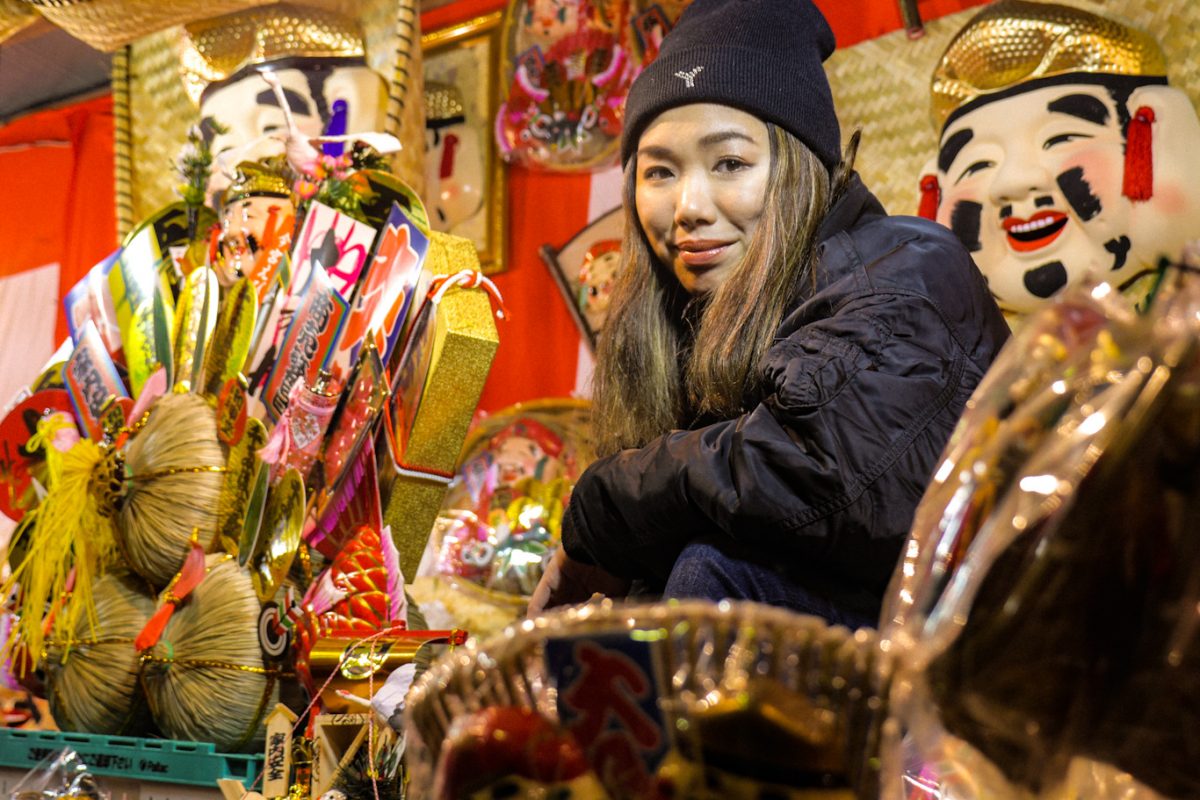 Kick off a successful New Year by celebrating Ebisu, Osaka-style.

11 Jan. 2020 – Osaka The Toka Ebisu Festival or Ebbesan, as the locals call it, recently filled the streets of central Osaka’s Naniwa Ward in an annual celebration. The event is centered on the Imamiya Ebisu Shrine in the Shadow of Shin Sekai’s Tsutenkaku Tower from 9-11 January each year. On January 10th, alone, nearly 1 million worshipers passed through the temple gates seeking this god’s blessing for the new year, according to shrine officials. The coincidence of the full Moon this year made attending the event in the evening even more alluring.

Ebisu is one of Japan’s seven god’s of fortune but, unlike the other six, Ebisu’s origins are entirely Japanese. As the god of fishermen, he is portrayed as bearded, chubby and jovial with a fishing pole and a large red sea bream fish that is emblematic of his fruitful labors. Also, unlike the other deities, Ebisu is said to have been born crippled and tossed into the sea by his parents. He did not die and, instead, overcame his disability and learned how to work hard fishing for a living.

The origins of the temple were as a gateway to Osaka’s greater Shitennoji temple in about 600 C.E. At the time, Osaka was still mostly a fishing and farming town but it rapidly became a bustling commerce center. Over the years, the Imamiya Shrine has taken on fame in its own rights and Ebisu’s fortune also smiles on commerce as well as fishermen and farmers.

While other gods of fortune represent good luck, Ebisu was not born lucky. He worked hard and the fish represents the bountiful rewards of good fortune favoring hard work. Perhaps that is why so many people come as they seek reassurance that their hard work will pay off in the new year.

The press of visitors carrying dried bamboo stalks is shoulder-to-shoulder but everyone seems to be happy and move along in an orderly fashion. Many buy lucky charms as tokens of good fortune as the endless stream of visitors moves slowly forward. This is a friendly and casual event but one man dressed in business attire purchases a token representing a bar of gold. “I own a company and come here every year,” said the man surnamed Kawakami. “I hope my business will do well so I can prosper.”

Once finally passing the temple gates, there are friendly faces of volunteer temple staff to greet the newcomers helping them to make a sacrifice of the brown, dried stalks of bamboo. The afternoon of the 10th is special because there is a parade and 50 special temple maids called fukumusume are chosen from among thousands of applicants will cheerfully hand out token gifts to lucky fortune-seekers.

These tokens or charms are also available for purchase from the temple if you are not fortunate enough to be honored by the fukumusume. Participants will each be given a branch of bamboo to sacrifice the following year along with the charms. There are many smiling temple maidens to attach the tokens to your bamboo branch.

Despite the scale of this event, it still has the friendly feel of a neighborhood gathering with everyone sharing in good cheer. In this crowd of many thousands there are chance greetings and random reunions happening everywhere. In the spirit of coincidence and good fortune, I even heard my name called out and found the familiar face of a friend from another district of the city greeting me from the booth he was staffing as a volunteer.

For an event based around a shrine, there were very few strict aspects of religion. No sermons or strict ceremonies. Just people happily making their offerings including tossing coins into the temple coffers, getting their bamboo and charms, and then learning their fortunes. For 50 yen, you can get a printed fortune based on your birthday or you can visit one of the many booths where sooth-sayers predict your coming year’s luck.

But the celebrants are reluctant to leave after making their devotions. They stay and have fun at the carnival-like atmosphere of the celebration whose stalls and vendors spread for several blocks to the north and west from the grounds of the shrine.

There are actually several other temples and shrines, such as the Hirota Shrine, are located within the festival and are swarmed by the crowds of people and merchant stalls, arcade games and endless selection of sweets and snack being sold. In the midst of it all is one small and quiet Shinto shrine.

境内社 赤土稲荷社remains nearly undisturbed as the crowds flow past the red lamp posts of its entry lane. The only sound piercing the tiny temple grounds is the occasional ringing of the shrine’s bell tolling from the rare visitor.

Ebisu is a character that enjoys feasting on the bounty of his hard work. Likewise, all of the celebration is hungry work. Aside from the endless snack stalls, a proper Osakan feast comprised of a wide range of local street food delicacies can be had at one of the many vast tent canteens that spring up for the festival. The din of joyous dinner conversations go on long into the night.

If you ever get the chance to visit Osaka around the new year, take the chance to participate in the Imamaya festival. Like Ebisu grappling his mighty fish, you might get a hold on good fortune for the coming year.