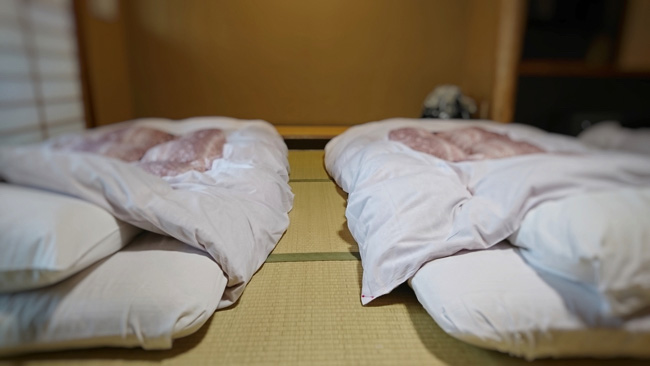 By Richard Trombly (with additional reporting by Jude Jiang)

A History of the futon

A simple, practical element in many futuristic furniture designs, the futon has become a common part of Scandanavian or Danish designs but this simple mattress was not created in Northern Europe. To find the ancient origin of these thin yet comfortable mattresses, one needs to look back long before the 1943 founding of Ikea and a continent away.

We spend almost one-third of our lives sleeping, yet we rarely consider the way in which we sleep. For much of the modern world, sleep means going to our own private bedroom and reclining on a raised bed with some sort of spring-frame and thick mattress. These beds, and the bedroom itself, are rarely used during the remainder of the day. This is not how people slept or lived during much of human history.

The earliest bedding discovered, consisting of compacted layers of sedges and grasses, dates back 77,000 years. Through much of human history people have slept on bundles of straw or other dried plants. For example, in Ancient Egypt bedding was piles of palm leaves. It may seem strange to modern social standards that ancient people often shared the same fire and shelter with extended tribal or clan members and had little privacy. They hunted, worked and ate together and even shared their bedding. They usually slept in a common hall on the floor except, perhaps, for their leader who might have a private chamber.

Some of the earliest raised beds can be found among the artifacts of the Egyptian pharaohs and nobles. Ancient Roman Empire elites also had beds and bed chambers but the commoners still slept on the floors. In Asia, beds could be seen as early as 220 in China’s Wei Jin South and North period when Buddhist influences brought raised furniture to the elite class.

The Japanese word futon 布団 originated from the Chinese characters pu tuan 蒲团 literally meaning a bundle of cattails. These cushions are still commonly used on the tatami floor mats, woven bamboo mats lining the entire floor of a room, found in many Japanese homes. The Japanese futon is not like the thicker, often foldable European counterpart. It is a system rather than the mattress itself. A futon typically is a thin padded mattress, called a shikibuton 敷布団, a quilt, called a kakebuton 掛け布団, and a bean-filled pillow, called a makura 枕.

Futons emerged from the abundance of cotton woven cloth that became available during the Edo period in the mid-1600s. First was the Yogi, an oversized sleeping garment shaped like a kimono but often large enough for two to share and were often given as a wedding gift. In essence, Yogi are more like a camping sleeping bag more than a piece of sleepwear. The futon emerged soon after.

The words mattress and mat both came into English from the Arabic matrah which means something thrown down. But there was an earlier culture of the mattresses in China. Mattresses are mentioned in the Li Ji 禮記 known as Book of Rites, a part of The Five Classics of Confucianism, a collection of rituals written during the Former Han Dynasty (206 BCE-8 CE.) It states that when more than five people gather in a room, the most senior person deserves to have a separate mattress. In fact, the word for leader or chairman, Zhuxi 主席 , literally translates as main mattress even as chairman refers to one who holds a position of honor but originally sitting in a chair, itself, was honorific since most sat upon benches or the floor.

Now these mattresses were not thick like those on modern bed frames and were not even soft. The Chinese pu tuan, though more refined than a mere bundle of reeds, were actually large mats woven from cattail, reeds, bamboo or other coarse materials. A finer layer of softer grasses might be used on top. They were shared and were used for much more than sleeping since there were few other pieces of furniture. The mattress was also where much daily life happened.

Dating far back into the ancient past, there were elaborate dwellings with heated floor systems, such as the Korean ondol 온돌, huoqiang 火墙 in China and the hypocast in Rome. Many more modest homes across the North of Asia were developed around a kang 炕, a stove or oven combined with a raised platform that, topped with a mattress becomes an all-purpose place for sitting, entertaining and sleeping. These kang beds are still a common feature in northern China. Japanese Kotatsu こたつ are like a more portable version of a kang. It is simply a low table with a brazier or electric heater underneath and a quilt over the top to retain the heat for those sitting around the table.

As technology and societies advanced, a growing merchant class could own their own homes, were eager to show their status and readily adopted the styles of the wealthier classes, including furniture. Adopting chimneys allowed for heating of individual rooms. With these advances, bedrooms, and the exclusive privacy they entail, became commonplace. The multi-functional mattress moved from the center of daily life to become a mere bed topper mostly used during the night and shared only by couples.

The main benefit of the bed is that of being raised above cold drafts but it was also an expression of wealth and class. With the bed and a growing sense of privacy, a greater need for space becomes prevalent.Once the mattress moved into the bedroom, there also became a need for chairs and tables and separate living rooms, studies and dining rooms and more furniture to outfit them. Long-term homeowners with stable careers can collect furniture and fill their homes with treasured items but moving a household then can become a hectic process.

As the world population grows and becomes increasingly urbanized and costs of housing increase, smaller apartments drive a need to reconsider how we make use of space. According to Japan’s Ministry of Land, Infrastructure, Transport and Tourism, about 45 percent of Japanese people are living in residences with less than 20 sq. m per person.

In Japan, modern design aesthetics are about creating a feeling of emptiness. This is not unlike the essential Nordic design philosophy of simplicity which is based upon the Bauhaus movement of the early 1900s. The Japanese largely retained simplicity in their interior design by virtue of the futon culture.

The sense of space is much different when there is no need for beds, tables, chairs and other furniture to permanently occupy the floor. Upon waking, futons are rolled and stowed and cushions can be used along with low portable tables to turn the sleeping area into a dining room or work and study space.

Reflecting the economic and environmental need for smaller apartments and the contrary desire for more space, designers are creating more co-living spaces where private rooms are small and efficient, yet many areas are shared spaces for cooking, relaxing, work, play, and recreation. These co-living spaces are not aimed only at the economically challenged but appeal to a growing number of youth that want to be flexible to travel or change careers and are reluctant to be shackled by the responsibility of owning cars or buying homes.

In this way, the transformable and multipurpose furniture like many Nordic futon designs are an answer to saving space with sofas and chairs that become beds and storage spaces or have foldout tables. Ingenious and stylish foldaway beds are also a trend for those with a taste for furniture to accommodate ever-shrinking spaces.

Another solution is to forgo the consumption and clutter of unnecessary furniture, to simplify and adopt tatami and futon living. Sleeping and living on floor mattresses is what humans have done for 70,000 years and it may be the way of the future.

Before chairs or beds existed, mattresses were nearly the only pieces of furniture and they were used for a wide variety of purposes and were at the center of life. On mattresses, people ate, did business, drank, huddled for warmth, loved, slept and studied. In China, the mattress also carried a deeper meaning portrayed in an ancient Chinese tale.

Towards the end of the Eastern Han Dynasty, the empire had become vastly corrupted by greedy ministers and traitors. Two scholars, Guan Ning and Hua Xin, studied at the same garden while living a simple countryside life. As long-time friends, they shared one single mattress during the course of their studies. They often discussed matters of philosophy and the state of the empire but differed in their view of wealth and power.

One day, a procession of nobles passed by their studio with a loud racket of carts and horses. Hua Xin started from his mattress, went to the window and looked onto the bustling street with gleeful admiration of the gentry passing there.

Guan Ning was no fan of the noble class. Disgusted with his companion, he cut the mattress into halves, vowing this act both symbolized the rift in their values as well as the breaking of their friendship. In that era, the mattress reflected a bonding, relationship or social status. In the modern time, we fill our homes with a variety of furniture pieces. Joining in a meal at the family table is a gesture of social bonding. Sharing a bed is an agreement of values and trust in relationship. The bed has become more personal and private than the traditional mattress.